Dragonlance was a great Dungeons and Dragons themed boardgame if you could get past knocking over the towers of altitude counters.

Dragonlance was an expansion to Dungeons & Dragons, a series of best selling novels and a tabletop board game. The game had great artwork and some innovative game mechanics even if they led to somewhat clumsy playing pieces. It stands the test of time and is still great fun to play but you should expect to pay a high price for a complete game. 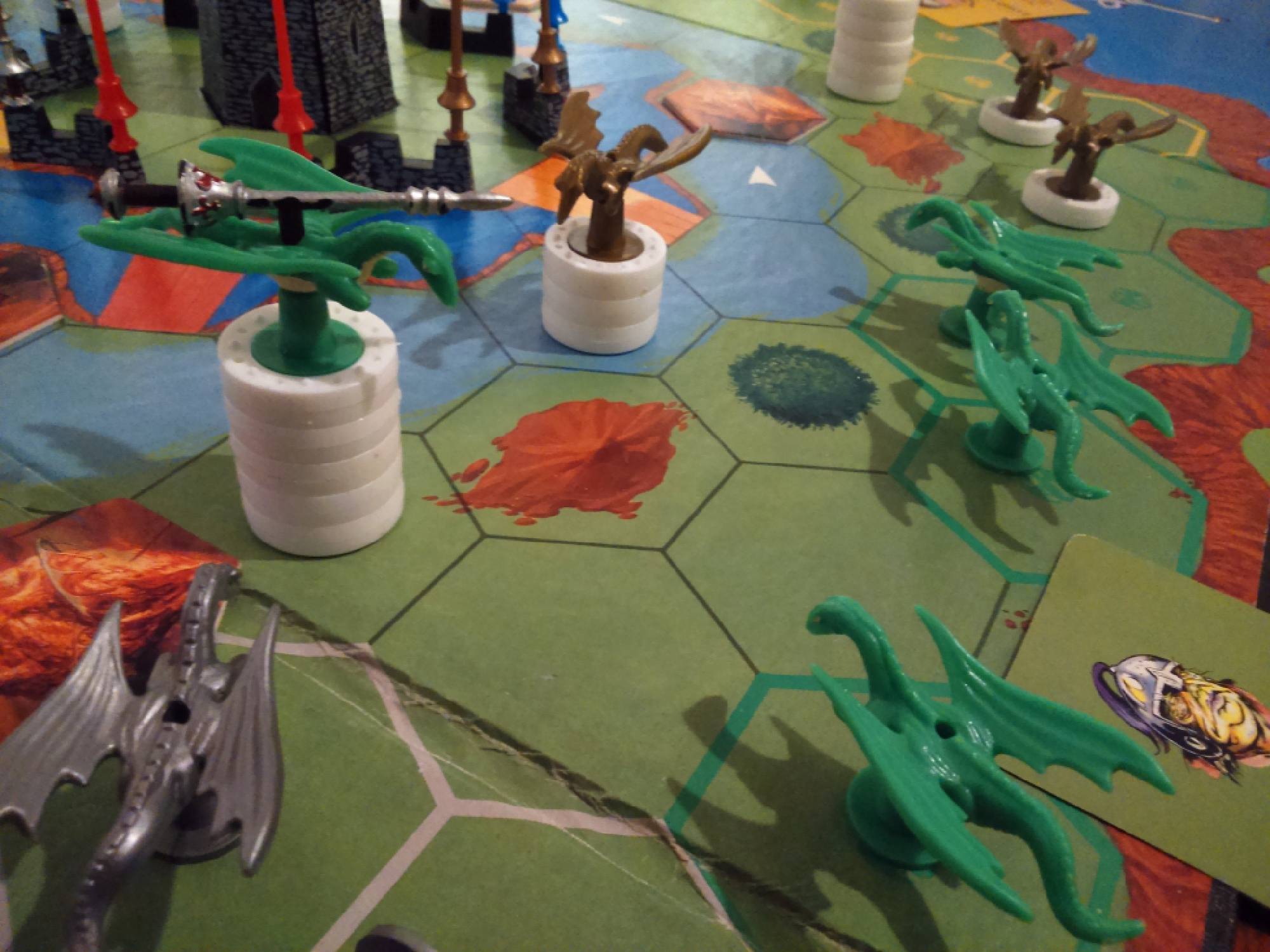 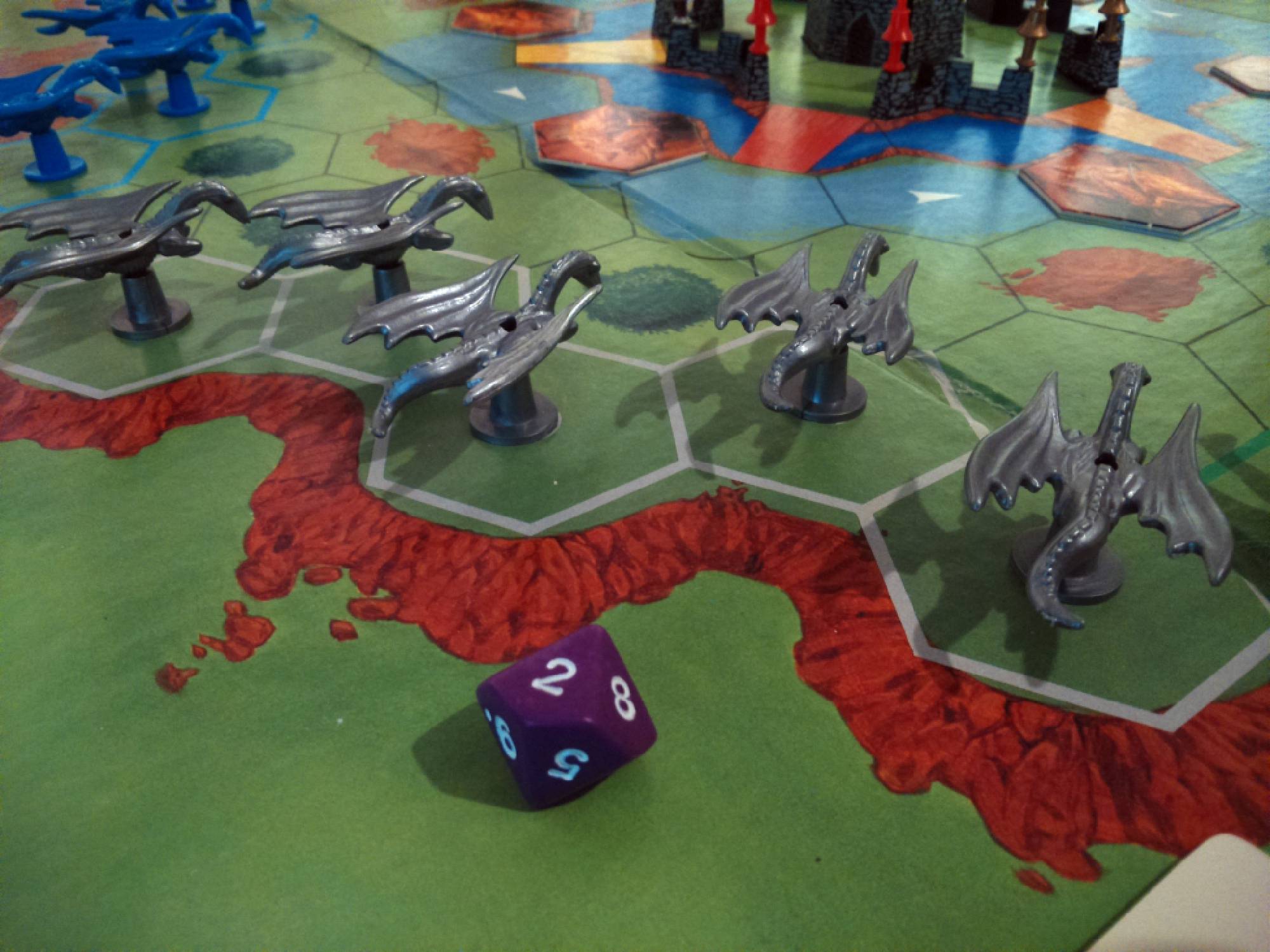 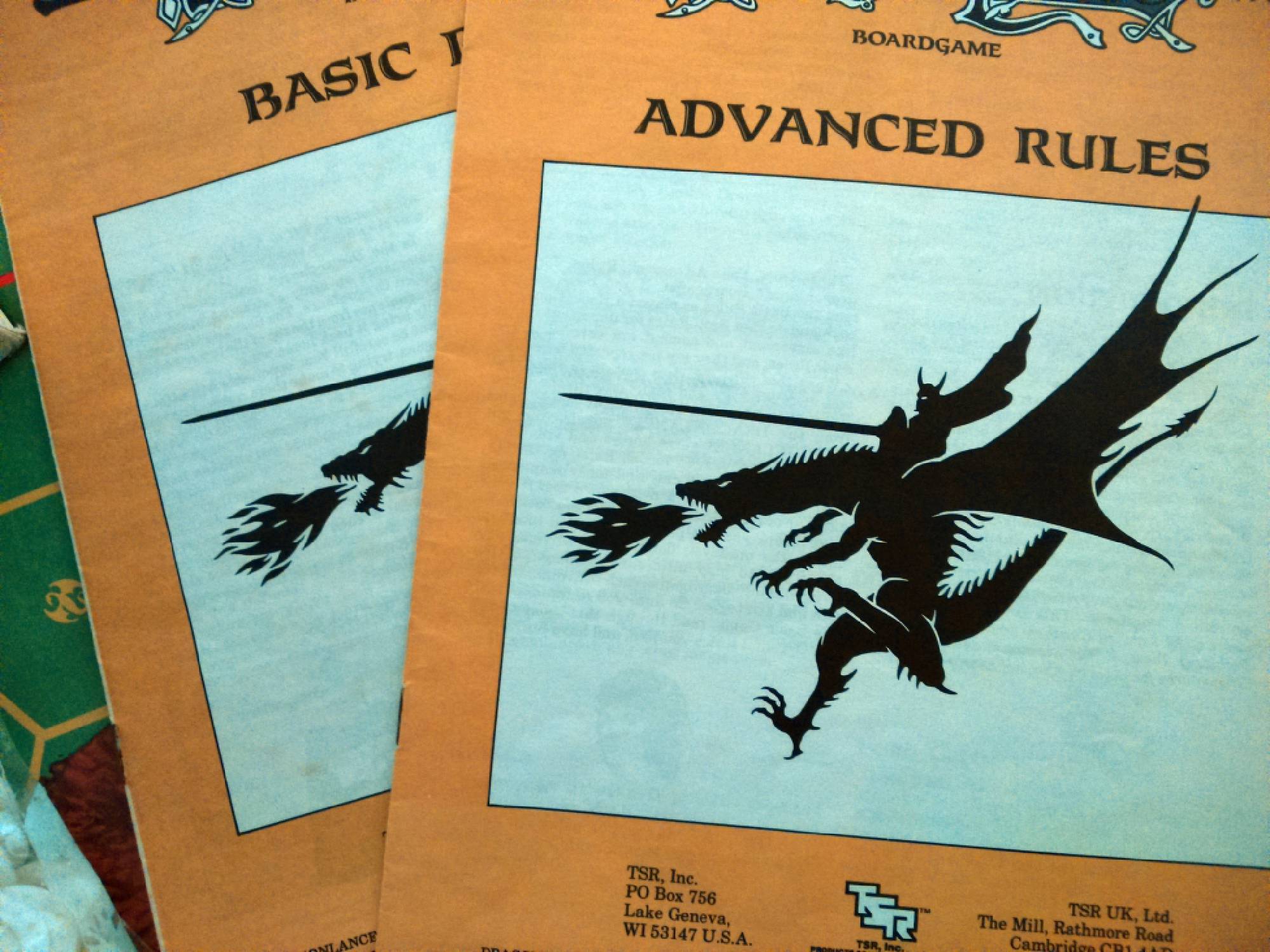 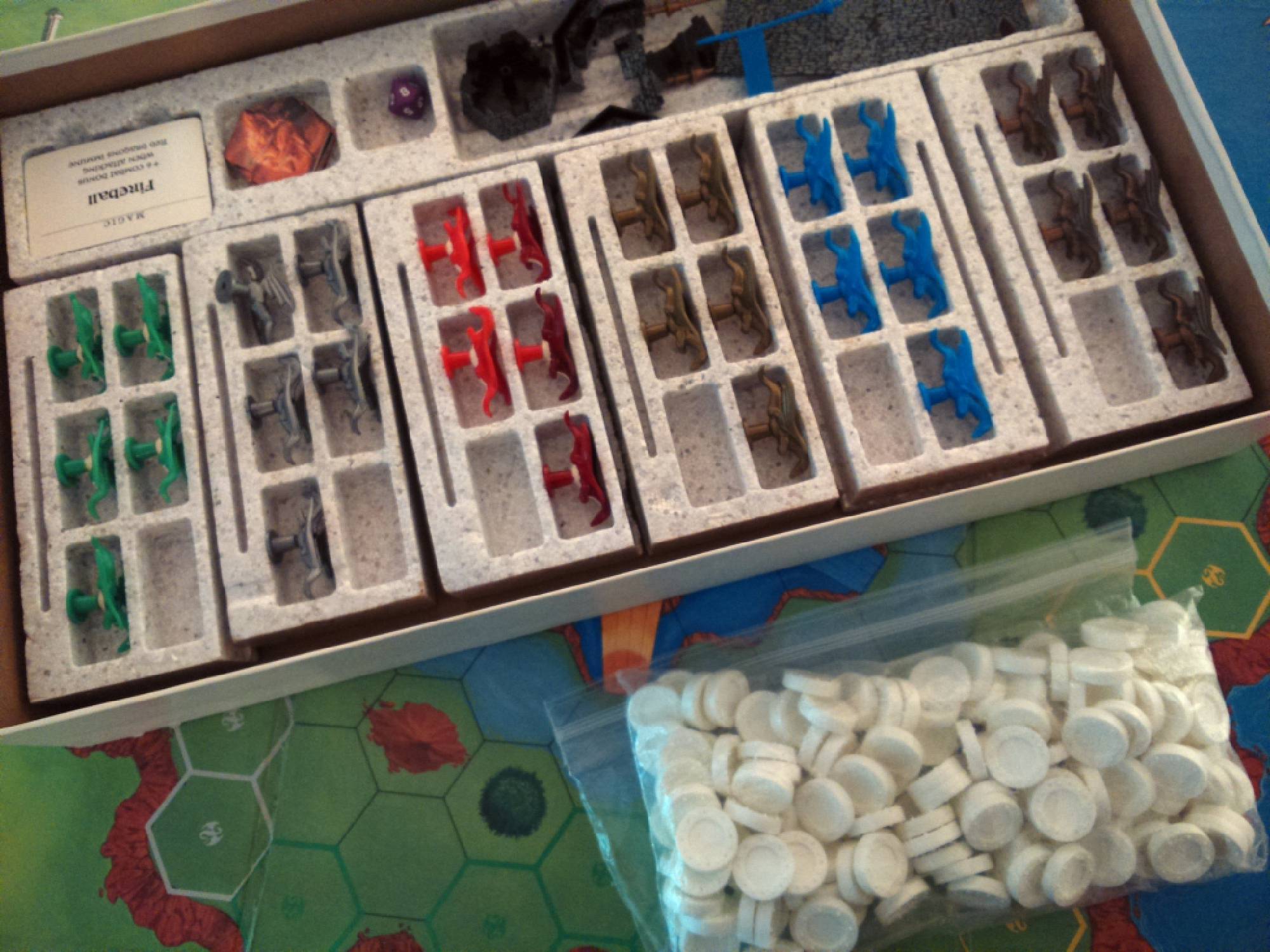 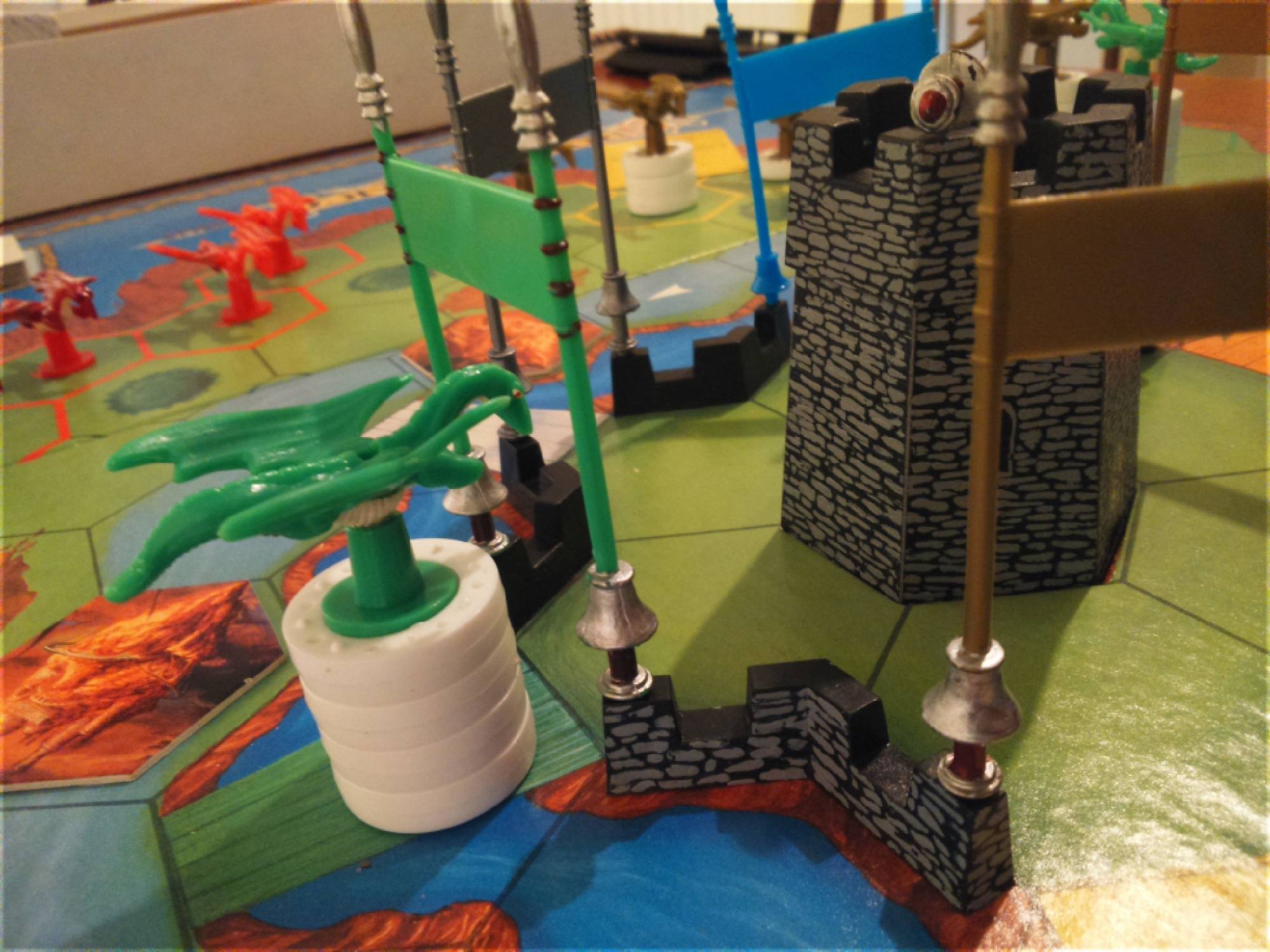 When Laura and Tracy Hickman were driving to TSR Inc. for a job interview they started discussing ideas for a new fantasy role play setting. What they created during that journey was the Dragonlance world of Krynn. At TSR Tracey met Margaret Weis and together they created not only a series of Dungeons & Dragons expansions but also a well written series of best-selling fantasy novels. TSR later produced a tabletop board game simply called "Dragonlance".

Dragonlance is an aerial dogfighting game where six teams of dragons compete and battle to retrieve the Dragonlance; a magical weapon and one of the few ways that a human can kill a dragon. The game supports six players who each begin with five dragons, alternatively, fewer players can control multiple teams of dragons. The game includes thirty plastic miniature dragons and a beautifully designed board which is a top-down view of Krynn overlaid with hexagons. Six sections of the board are marked with a dragon's colours to represent their home base. Rolling a D10 determines how many movement points you are granted and you can distribute these amongst your dragons however you like.

The dragons start grounded, although the game can be made to run much faster if you start with them all in the air. To represent altitude Dragonlance uses interlocking white plastic counters which can be stacked and the dragon placed on top. This mechanic creates a 3D game space allowing dragons to climb and swoop into battle with others. The hexes are put to good use and a movement point could be spent on moving forwards, rotating one hex face or changing altitude.

The aim is to penetrate the central enclosure through your own colour coded gate which is opposite your starting ground. You have to swoop down to an altitude of four to be able to fly under the gate and then climb back up to an altitude of ten to retrieve the lance which sits on top of a tall central tower. Once your dragon has the lance they have several combat advantages and a player holding the lance can win by flying back to their home ground and landing.

The altitude counters work well except there are some stability issues when you're trying to move dragons balanced on top of stack of ten counters through tight spaces. This becomes a real issue when flying around the tower and it is often better to remove the gates when playing this part of the game. The game also comes with advanced rules which add a little more strategy and variety through character cards and magical spells.

Dungeons & Dragons always had plenty of dungeons to roam but you seldom encountered a dragon. When such an encounter did happen it was usually the highlight of the campaign. Dragonlance not only brought dragons into the foreground of traditional campaigns but this ambitious board game put you at the command of an entire army of dragons in an exciting battle for supremacy.